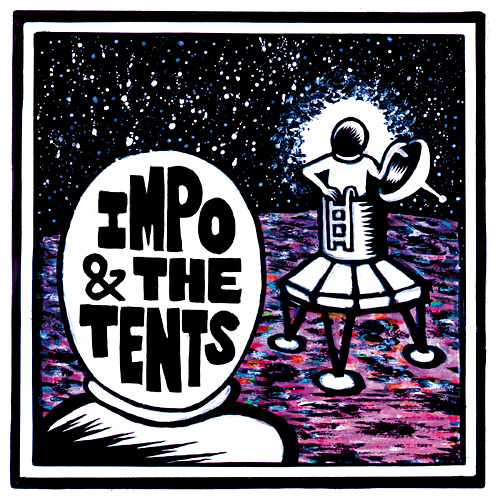 RELEASE-INFO:
Swedish sapheads IMPO & THE TENTS started out in 2009, influenced by 60s/70s beat, girl group, bubblegum, punk and power pop. The songs are rarely longer than two minutes, yet filled to the rim with whopping hooks, cheesy melodies and rattling riffs, topped with quirky lyrics and occasional organ knickknack. The band consists of ADHD drummer Victor, guitar spaz Dan and singer/bass player Rune, who’s squeaky, snotty vocals have been compared to the likes of Feargal Sharkey (THE UNDERTONES), Leonard Graves Phillips (THE DICKIES) and Jay Reatard. This far in the game, the group has released an s/t LP (2011, Alleycat Records) and two 7inches; “Don’t give me your number” (Alleycat Records, 2012) and “Nothing to say“ (Push My Buttons, 2012). With their new 7inch “Going to the moon” IMPO & THE TENTS whip out three new hit-songs and they even saved their best song ever ("Do the wipers") for the B-side. Crazy Swedes! During the last couple of years, they’ve been building a reputation as a tight live act while plowing their way through Northern Europe, aiming for the South in springtime 2013.

Recorded at the Dustward by Frank E-Male!
All music by IMPO & THE TENTS!
Artwork by Avi Spivak.


SOUNDS:
VIDEOS:
Early rehearsal-version of "Do The Wipers"! 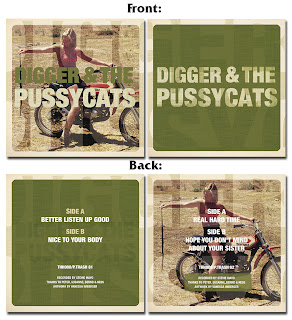 This year marks the 9th Birthday of Melbourne’s favourite two-piece garage-trash band DIGGER & THE PUSSYCATS. That’s right, they’ve almost hit the double digits. Geez…who would have thought that what started off as a bit of a joke by two mates looking for a reason to drink free beer and try to meet girls in their hometown, would take Sam and Andy to all corners of the globe across four continents. The DIGGER & THE PUSSYCATS of 2012 is vastly different to that of 2003. Although their live set still features songs from their very first songwriting session, the boys themselves have changed. Whilst age has not wearied them, it hasn't been kind to them either. Yes, they are no longer Young, Tight and Alright. But they aren't the slightest bit perturbed to be carrying a few grey hairs and a bit of extra weight, they still have a thirst for the stage, a love for each other and a desire to keep on writing and performing music the world over. With a back catalogue brimming with five albums, eight 7”s, a 10” and an EP, DIGGER & THE PUSSYCATS return with two new 7” singles to be released through German labels P. Trash and Timmeheiehumme. To celebrate the band are putting their adult contemporary lives on hold and getting in the van for an 18 shows in 18 days tour of Netherlands, Belgium and Germany. Expect suicidal rock moves, bad jokes and immature songs, not to mention the smell of gig clothes that live in a plastic bag in the back of the van that don’t get washed until the final show. Not bad for a couple of thirty something fellas from Australia. So you better be ready - DIGGER & THE PUSSYCATS are taking the Wrong Way To The Top and they need you to buy them a beer and help them on their merry way. Surely, you at least feel just a little bit sorry for them. Go check out one of their shows and buy their new records.And just so that you know, the girl on the motorbike holding up the dead snake is Andys daughter's granny back in the 1970's.... no joke, you see the "desert-garage-punk" in her gene!!!

Postscript: The tour is over and was a blast! Here's a video I did at the first show in Münster! 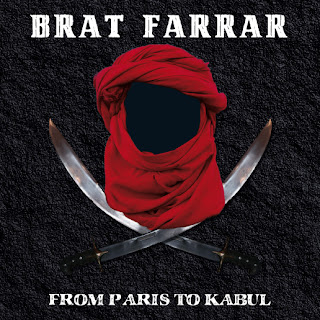 RELEASE-INFO:
BRAT FARRAR is the new DIY-project/band of Australian wunderkind Sam Agostino. You know him from awesome outfits like DIGGER AND THE PUSSYCATS, KAMIKAZE TRIO or RUSSIAN ROULETTES! After sculpting his debut record (released on P.Trash Records) for several months BRAT FARRAR returned to the studio to smash out "From Paris to Kabul" his first ­follow-up single! This 7inch is also the tour-record for the BRAT FARRAR European tours in spring and November 2012!
The song "From Paris to Kabul" shows a more metallic yet melodic edge than BRAT FARRAR’s previous releases and is yet another step in the evolution of BRAT FARRAR. Dig that punching bassline and freak out! On the flip "I Don't Care" shows BRAT FARRAR drawing his line in the sand and giving a solid middle finger salute to just about everything. A perfect bone-dry garage-rocksong, like only Australians can do it. The chorus will follow you for weeks! When your boss bullies you ... your girlfriend ran away ... and your beer is empty ... I don’t care!!! Go see BRAT FARRAR live on his Euro-tours in 2012!!! 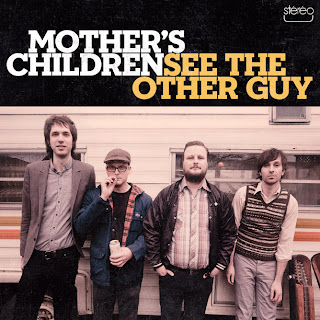 RELEASE-INFO:
Hot off the release of the highly praised "Are You Tough Enough?" Mini LP, comes 2 brand new Power Pop crunchers from MOTHER'S CHILDREN. Since the release of their 2010 debut LP "That’s Who", we’ve seen MOTHER'S CHILDREN go from stomping Glam Rock, to bubblegum smacking Pop, to pub-rocking proto-Punk and back again without skipping a beat. On this teaser of a single, they achieve pure Pop perfection 1979-style, bringing up comparisons to 20/20, The Plimsouls, Twilley/Seymour, The Shoes, Stiv Bators, and Gary Valentine. MOTHER'S CHILDREN are coming out with a caliber Power Pop, unlike any other band in Canada right now, and they have all the amazing hooks, the brilliant harmonies, and the necessary skills to be the best in the business. MOTHER'S CHILDREN have toured U.S.A. and Canada with Paul Collins’ Beat, The Biters, and The Barreracudas, and In May 2012, just in time for their new single, they embark on their first European Tour with Germany’s Mondo Ray. TermBo sez: "Absolutely bursting with exuberant hooks, liberal sprinklings of glitter and power-pop with some actual power." 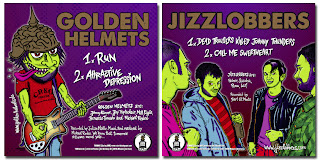 RELEASE-INFO:
About the bands: Both bands are well-known in the German Punkrock-scene, especially in their hometowns Cologne and "Rockcity No. 1" Solingen. JIZZLOBBERS and GOLDEN HELMETS are true "brothers in crime", not only because they both released their full-length debut-albums on the same label and at the same time in 2010. Now they finally team up on this split-EP!
GOLDEN HELMETS tell you smart things: "In a club at night circumstances change. Everything’s different." – A good old wisdom. Five yobs, driven by their very own "Mission from God", can’t help but keeping this wisdom alive. Early they’ve got hooked up with ­garagepunk by playing in bands like DIRTSHAKES, CAVE 4, CURLEE WURLEE, BATTLEDYKES and THE SHELLS. No matter which country, city or venue – this mission is law and the method is easy, loud and simple: Farfisa-driven 60ies punk and garage-rock combined with a little Northern Soul! And there’s just one rule a wild show by The Golden Helmets is based on: "They don’t eat no honey, they’re chewing whole bees." So, if you ever get the chance to see them live: Don’t miss it! They are ripping party animals!!!
The JIZZLOBBERS play energy-driven melodical oldschool-punkrock built on sweat and loads of thirst. The band was born in 2000 sporting current staff members since October 2006. Maybe one or the other has heard about them from great former bands like BACKWOOD CREATURES or HAVANA RAGDOLLS - though propably not. JIZZLOBBERS got the pretty charms of bands like the LAZY COWGIRLS – in their music and some say in their looks, too! Well, musical-wise just add some oldschool-stuff like Mr. Thunder’s HEARTBREAKERS and cool cats like DEVIL DOGS, HUMPERS, BRIEFS, MODERN ACTION and SHARP OBJECTS and you’ll get the picture: Just great ’n catchy Punkrock!

The record: The full-length albums of both bands (High Noon Records, 2010) are truly great but they are CD-only. What a shame! This kinda music is meant to be pressed on vinyl, so it was about time to waste energy and ressources on this project!
GOLDEN HELMETS deliver their masterpiece with their new songs "Run" and "Attractive Depression"! Masterpiece cuz there was always ONE thing to complain about the band: they couldn’t catch their unbelievable live-energy on their studio-recordings. So, there were two choices – to record a liveset or to destroy a studio and polish the new tracks with shitloads of ­studio-ruin-dirt and Farfisa-crazed-madness! The band made the second choice and the result is ab-za-lootely over the top!
JIZZLOBBERS do nothing less than to answer one of the last unsolved mysteries of Punkrock: Who killed Johnny Thunders? The Germans did!!! To be accurate: DIE TOTEN HOSEN (or "The Dead Trousers" in perfect German English)! Those fuckers payed the last cheque for Johnny’s golden shot! And they continued with crimes against Punkrock e.g. by stealing the complete "On A Rope" riff from ROCKET FROM THE CRYPT for one of their shitty songs. Disgusting! But that’s another story... Thank god that there are still bands like the JIZZLOBBERS who still pay respect to the heritage of Mr. Thunders. Listen to the great songs of the JIZZLOBBERS: melody, energy, passion and some great singing. Those guys know how to write AND play amazing Punkrock-tunes! That said, maybe the world will pardon us poor Germans for our sins someday. Call us sweethearts! 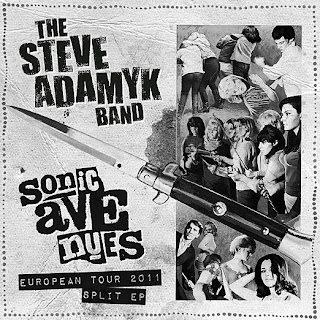 RELEASE-INFO:
If you like both kinds of music, Power and Pop, and if you need your Punkrock sticky like a popsicle, it's time to finally leave the house and go see this double feature of two of the most talked about bands last year. All the way from Canada, THE STEVE ADAMYK BAND and the SONIC AVENUES will keep your ears glued to the PA like a two-component adhesive. And to make sure this will be a night to remember, here's an appropraite souvenir to take home and make love to: A Double-A side split EP with a brand-new original and a superb coverversion by each band. ADAMYK and his band with the super catchy ''Bored of love'', that could work as the perfect opener for a new LP, and ''Eternal Isolation'' by our pals IDLE HANDS, perfectly adapted to their needs with LIZZY dual guitars and vocals. The SONIC AVENUES present themselves even poppier than on their LP with the sugarcoated ''Fading love'' and the wavy and heartbeating SWEET BABY cover of ''Two tons of dynamite''. This very limited platter comes in the German soft-porn design of the 70s and is perfect to join in any escapade, not only with the Bavarian Fräuleins. Don't miss out on this one!

Format: 7inch (2 songs, 45 rpm)
Availability: Only some copies of the "Release party/THH Records" edition are still available. The rest is SOLD OUT!!!
Release-date: September 2010 (split-release with P.Trash Records)
Versions: 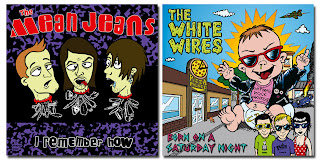 RELEASE-INFO:
Two of the best US/Canadian Punkrock-exports cross the pond in September 2010! Their superb longplayers made highscores on almost every Punkrock-playlist worldwide and for their Euro-tour they did the only right thing to do: they team up on one EP to cover each other! The retarded party-dudes of the MEAN JEANS took "I Remember How" from the WHITE WIRES and made a ultra-sharp smasher out of it! In return the WHITE WIRES (feat. Ian, Going Gaga Records, SEDATIVES) do a classy version of the MEAN JEANS tune "Born On A Saturday Night",100% poppy SUPERCHARGER-style. Packed in a beautiful cartoon-artwork this is the PARTYRECORD for fall 2010! Listen and believe it! And go see the MEAN JEANS and WHITE WIRES live on stage!

THH Records on the internet